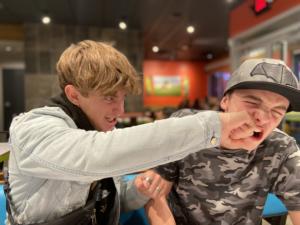 Let’s talk about it.

You only get one brain and it’s darn valuable. Some high schoolers in my area have been having “fight nights.” They put on boxing gloves and throw haymakers until someone gets knocked out. They create a mob-mentality with all the high schoolers in a circle egging them on, further jacking the situation.  Then they often post it to social media.

TRAUMATIC BRAIN INJURY:
At 10:30 pm Last weekend I got a call. One of my patient’s sons was involved in a fight night and was knocked out cold. The father and I spoke and he said he was “pretty bad” and asked if I could help. I did a house-call to check out the situation. The poor kids brain was severely concussed. He was severely agitated, confused, and stuck in a 30-45 second loop mentally. He would repeat himself and always end up confused and angry. These are classic symptoms of a severe concussion to the frontal lobe of the brain. Neuro exam was otherwise intact. I advised them to head to the ER as this was one of the worst concussions I had ever seen. They said they couldn’t afford an ER visit at this time. I’m certified in Advanced Trauma and Life Support and I’ve worked in an ER but I didn’t have a way to scan his brain for a bleed. I decided on frequent neuro exams and something to calm him down. I collaborated with the local ER physician who agreed with my plan and understood the situation. I sent Mom to a 24 hour pharmacy and we were able to get the him calmed down finally at 1:30 am. I watched him closely over the next 72 hours with frequent neuro exams to ensure he wasn’t bleeding in his brain. He gradually recovered mental clarity over the next few days.

This kid could have died. Let’s put a ban on fight nights and keep these kids safe.

At Voyage Direct Primary Care we go above and beyond the current healthcare system and help families access old-school family medical care. ???? It’s also important to point out the strains the current healthcare system (with it’s copays and deductibles) is putting on families. I’m glad it all worked out and I was able to help them but this could have went sideways pretty easily.  At Voyage DPC we are striving to fix much of what’s wrong with the current system by providing a high level of availability, transparency, and affordability.  We believe the families deserve great family medical care.

**this picture is a dramatic re-enactment of a face blow. It’s not real**????