Add a Doctor to Your Family 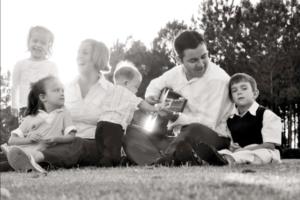 This picture was taken during John’s third year of residency. Our family was living in Jacksonville, FL, and during that year—not too long before this picture was taken, actually—I contracted appendicitis and had to have my appendix out. Elijah was 10 months old. If it hadn’t been for John’s help, I don’t know what I would have done.

I feel incredibly lucky to have a doctor in my family. He’s stitched up three of our four children on multiple occasions, saving us the hassle and cost of an emergency room visit every time. He set my son’s broken wrist, prescribed antibiotics for my daughter who contracted strep throat, and adjusted my neck and back when I woke up the morning of my first law school final in excruciating pain from incorrect studying posture.

In addition to his medical training, however, he’s always been a great team player and consultant concerning alternative and complementary treatments. So when I wanted to give my babies echinacea with elderberry syrup to help build their immune systems, he agreed. He suggested I use melatonin instead of Tylenol PM to help reset my kids’ sleep cycles when they were jet lagged. And he recommended increased vitamin D to help with my sagging energy levels instead of caffeine.

I don’t share these stories to boast that because I’m married to a doctor, I get special treatment. Every one of his patients gets special treatment. And I know because I’m married to the doctor. John started Voyage Direct Primary Care because the subscription model allows him to be the kind of doctor he wants to be–one who cares for his patients like he cares for his own family.

It’s beautiful care, and I’m proud to support him in this journey. So come join us. We’d love to make you part of our extended family.

-Shaunna Sanders, a.k.a. “the doctor’s wife”